The other day, I was faced with a conundrum: find a beer that’ll appeal to the Heineken crowd, but that I was still proud to put in Golding’s very small fridge. You see, when you run a high-end beer bar, you still need to have something that you can give to the folks who just want a Corona. I call it Snob Insurance, because having an easy, mainstream-style option prevents a beer bar from being called elitist snobs. Well, most of the time, anyway.

So for assorted reasons, we needed a new easy lager to put in our fridge. Now if a large group of lager drinking  people comes in, they can demolish a 24 pack in a night easy. So we needed a lager that we could order overnight from a local distributor and have it turn up the next day. Now that cuts out at least half the bottled lagers brewed in NZ because they don’t have reliable distribution in Wellington.

The leading candidate was Tuatara Helles. It fit the style, it was affordable and easily available. But it seemed, I don’t know, too easy I guess. We were considering Epic Lager; a good little beer with fantastic brand visibility. Unfortunately it came at shall we say, a premium price point. Then Sean made a suggestion: what about Gisborne Gold? Suddenly the heavens parted and rays of Sunshine (Brewery) fell upon us.

Ah Gizzy Gold! That reliable old workhorse. My student beer. Back when no one made good beer, there was Terry McCashin, there was Richard Emerson, there was Roger Pink, and there was Ben Middlemiss. But there was another name, which doesn’t get mentioned a lot these days: Geoff Logan and Sunshine Brewery.

For a more complete history of Sunshine Brewery, I recommend reading Michael Donaldson’s Beer Nation, which has most of a chapter devoted to the brewery. As far as my history with Gizzy goes, five years ago, when I was a penniless student, I drank a lot of it. I drank a lot of it because it was cheap, good, and plentiful. It really was everywhere in Wellington at the time. I even remember the first one I drank. It was at the Film Archive, whilst watching a 16mm print of The Woman of the Dunes. Gizzy was a fixture on the FYO at Regional Wines and Spirits and even the named sponsor of the annual Beer Options competition. 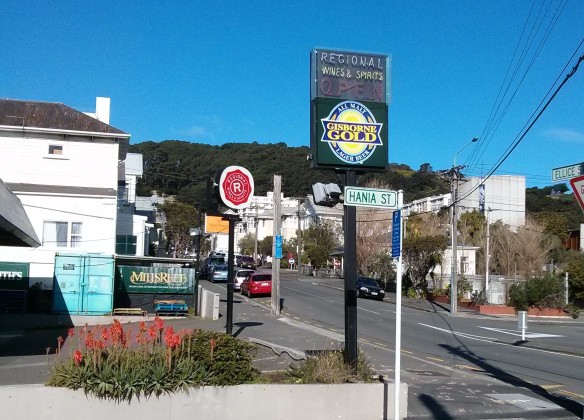 The Gisborne Gold sign at Regional proclaims it to be ‘All Malt’, harkening back to a time when that actually meant something.

Five years later though, and things have kind of changed. I can’t remember the last time I saw Gizzy in a bar, let alone drank one. I fear sunshine brewing has, like a handful of other small breweries fallen behind the times (cough *Founders* cough) . They make pretty much the exact same beers they’ve always made. And lets face it, the market has changed. People want excitement and variety.

Of course lagers will always sell well, but Gizzy doesn’t have the brand muscle to make a dent in Stella sales, but isn’t quite exciting enough as a beer to cut it with today’s Pilsner crowd. And that’s kind of why I’m excited to have it in our fridge. Because it’s a slice New Zealand brewing history, as well as a piece of my own personal beer journey. It’s also a damn good lager and we’ve been selling a metric shit-load of it.

I reckon it’s time for a Gizzy come-back tour, and that might just be on the cards. My sly mention of Founder was pertinent, because just like Founders, Sunshine Brewery has been sold. Not long after we got it in, I learned that , Correction, my network was wrong: a group with ties to liquor distribution company Vintners, has bought the brewery. The sale will become official in 2 days time (30/09/2013). Whether this is a good or bad thing, only time will tell. I hope it will re-invigorate a brewery that has basically, not shifted much in over a decade. We shall see.

I was going to do a normal review of Gizzy, but frankly when I drank one, it bored my trousers off. It’s not the beer that’s changed. It’s me. So instead, I’m going to review it through the persona of 19 year old Dylan. Beardless and a bit skinnier, here I go:

Gizzy Gold: F*** Yeah! I love this beer. Lovely golden colour with a white head. Solid lager-malt body with a slight hoppy bitter finish. Head and shoulders above such brews as Macs Gold. For about $10 for a 2L rigger from Regionals, how can you go wrong?