Hallelujah, I’ve hit the big time! Yes, at last I’ve been recognised as a legit-grownup-journalist. No, I’m not finally getting paid to write this. Official recognition has come in another form: a Beervana Media Brew.

This is an annual competition in which journalists and breweries collaborate on a beers, which are then served at Wellington’s biggest beer festival, Beervana (which I’ve written at length about here, here, here, here, and here). The journos then drum up publicity by talking about the beers on their respective platforms. This year I am to join the illustrious company of journos from Stuff, Dish, the Manawatu Standard, and Fishhead Magazine to create a unique beer you can try at this year’s Beervana.

Alright, I’ll be fair. I’m also going head to head with Ben Irwin and Patrick Gower; which is a sentence I never thought I’d find myself writing on this blog…

Which brewery was I to be collaborating with? Turns out, I’d been paired with Wild & Woolly. Wild & Woolly is a new player in the brewery scene and run by Llew Bardecki, one of the most talented off-the-wall brewers in the country. He also happens to be one of my closest friends in the beer scene. Perfect.

In fact we’d already (sort of) collaborated together once before, when a satirical post of mine inspired him to make one of the rarest and highest-rated beers in New Zealand.

The collaboration process for us was a lot of fun and mainly involved me wandering into the brewery where Llew was working, and the both of us throwing ideas at the wall to see what would stick. And we had a lot of very strange ideas. The theme this year is “Can the Flag Debate”, which isn’t bad as themes go, because it’s broad enough that you can basically do anything you feel like and then retcon a justification for it.

So here’s our pitch:

Changing the flag? Barely seems worth it. But since we seem to be committed, I guess we may as well make a go of it. I actually wouldn’t mind changing to something a little more culturally relevant. I mean the current one is a bit of an old colonial rag, isn’t it? I would quite happily leave behind the trappings of Britishness and start again with something that reflects the multiculturalism of New Zealand.

And let’s finally admit that our ancestors nicked this country off some people that had one hell of a better claim to it. Then perhaps we can do a proper job of making amends for that fact. And let’s change the name from ‘New Zealand’ to ‘Aotearoa’…

Oh, sorry, getting off topic.

Our beer starts as a strong Scotch Ale. Then, as a symbol of protest and rejection of colonialism, we took Britain’s favourite beverage, tea, and set fire to it.

A portion of the beer’s malt bill was hot-smoked using Dilmah’s finest Ceylon. 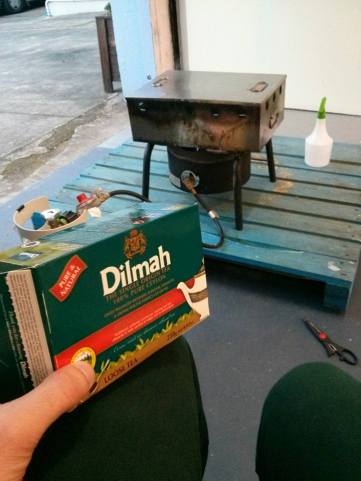 The normal process for smoking malt is to cold-smoke it, but time and equipment were limited in this instance.

I’ve done a fair amount of hot-smoking, usually with meat and wood smoke. Smoking with tea is a whole new experience for me. The aroma coming out of the smoker when I turned the burner on was amazing. At first it smelt like someone brewing a cuppa, then, as the moist tea began to smoke, it smelt like I was sitting by a campfire, brewing a pot of tea after a long tramping expedition. Delicious.

The tea-smoked malt was mashed into the beer with the rest of the grain and everything continued as usual. That is until we reach the boil. Instead of hops (another import from the UK, we wanted to use a New Zealand native equivalent. Specifically a New Zealand equivalent to the tea that we had just burnt – Tea Tree, better know to us as Manuka.

We threw 300 grams of fresh Manuka tips into the boil, at about the time hops would normally be added to the beer (and in direct violation of Patent no. 519778).

Again, the aromas that come out of the kettle at this stage were fabulous. I remember saying to Llew that if we capture half that aroma and flavour in the finished beer, it’ll be fantastic.

At time of writing, the beer is finished fermenting and is just about to go into the keg. It tastes excellent. I am really, really proud of this beer. The smoke has come forward a fair bit, and is completely unlike any other smoke character I’ve tasted in a beer. The beer is a little sweet, with a wonderful manuka flavour following (somewhere between banana and rose, with just a hint of menthol).

We’re calling the beer ‘Flag Burner’. It will be available at Beervana at the Media Brew Stand. There’s only 50 lites and no guarantee you’ll ever see this beer again, so if you’re going, seek it out.

Fun fact: this taste of New Zealand was brought to you by a 1st gen Canadian and 2nd gen Swiss immigrant.