Investing in Yeastie Boys is without a doubt one of the worst decisions I’ve ever made.

OK now to qualify that statement. No doubt if you’re even remotely connected to the New Zealand beer scene you’ve heard the news: Yeastie Boys raised half a million dollars in 26 minutes via crowd funding. Let’s all take a moment to appreciate that feat. 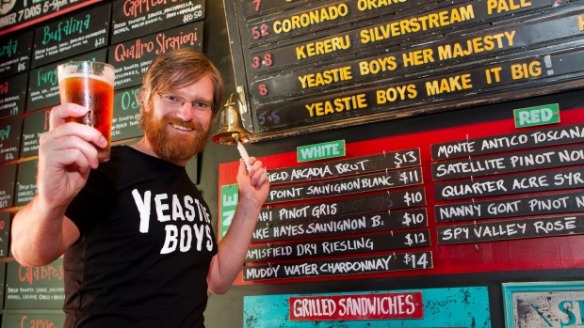 Done? Right, now lets talk about how disastrously, ruinously mad it is.

The occasion has special significance for me for two reasons: first of all, the launch party was held at Golding’s, and I was working it. I’ve bartended many monumental occasions, including the launch of ParrotDog and Garage Project, but this one may just take the cake.

The other reason it’s significant to me is that I’m one of the the 219 people that chipped in money. Yes, I foolishly ponied up my hard earned cash for a tiny slice of the Yeastie Boys pie.

It was not my intention after reading the share proposal, to invest in the company. Because lets face it, the below the line  commenters on the National Business Review articles are correct. Economically, Yeastie Boys is a terrible investment. It’s not that the company is going to go down in flames. To the contrary I have very good reason to believe that it will soar, if not like an eagle, then at least like a fairly ambitious pigeon. No.

But the cold hard facts remain: Half a million only buys 12.5% of the company, which places a value on Yeastie Boys at ~4M, or in other words, somewhere between high and ludicrous. Considering this, and the relatively low-profit nature of brewing at any scale, no one will ever see a good (if any) return on their investment. It’s truly a terrible decision to invest in the Yeastie dream.

But here’s the thing – we, as in everyone who invested in Yeastie Boys, already knew that. So why the hell did I willingly, gleefully even, chuck my cash into a flaming black hole? Well, first of all, because I could.

I invested a cheeky $500. I could frankly take that much cash out to the BBQ right now and set it on fire (or burn it in one hundred other more creative and figurative ways). Whilst this would be a very foolish decision, at the end of the day, I could do it and still make rent.

And I suspect this goes for everyone else who also threw money in. The average investment was ~$2500. There will be many low level investors like myself, but also a few that invested much, much more money than that. But I also know for a fact that no one invested at a level which means they’ll have to foreclose on the family home if Yeastie Boys doesn’t immediately (or ever) start paying out big dividends.

Frankly, the only one who’s going to get seriously burned if this whole thing doesn’t work is Stu. And he knows that.

The other reason I invested in this thing comes back to something I wrote a few months back:

So here was the chance. Money where mouth is. And it’s been two weeks since then and in the cold light of day, I stand by that sentiment. I want more Gunnamatta. I want more Pot Kettle Black, and yes, I even want more Rex Attitude. I do not for a moment regret making the worst financial decision of my life. In fact I’d do it again, in an instant. 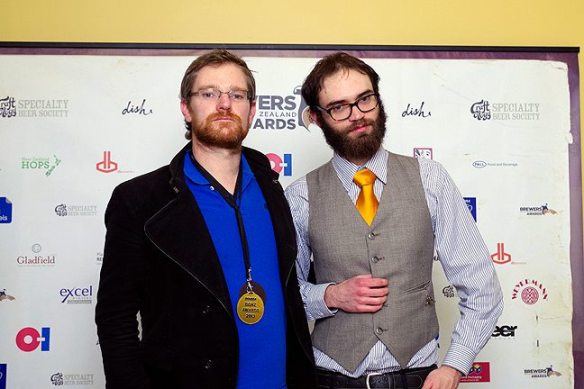 Stu and I at the BrewNZ Awards, 2013.
Credit: The Brewers Guild of New Zealand

Having said that, there is one thing I’m nervous of: other breweries.

I can feel them, right now, waiting in the wings. Those who have seen what Stu and Sam have done and are thinking of going and getting their own share of that sweet, sweet crowd-sourced money.

I know that people are thinking about it and I can tell them now – it won’t work out the same. It might seem like Yeastie Boys pulled this off in 30 minutes, but they have been building up to this for 6 years, and Stu has personally been working towards it in one sense or another for more like 10 years (ask him one day about the history of Liberty Brewing).

So think long and hard before you go out there and try to recreate what Yeastie Boys (or even Renaissance) have done. There’s no guarantee it’ll turn out how you want it to.

OK, lets end this on a positive note.

I have officially sliced myself a “piece of the Yeastie Boys pie,” as Anna Guenther of PledgeMe puts it. But frankly, I don’t feel like I have. I feel more like I’ve contributed a little dough (pun intended) to the amorphous mass, which will eventually be rolled out to make the crust of a really special pie. 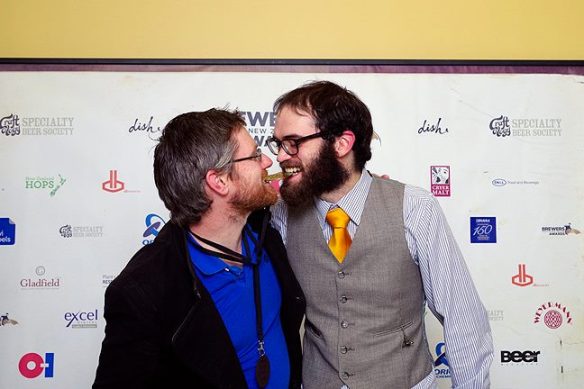 1 thought on “The Worst Decision I Ever Made”