With so many new breweries opening in recently and no doubt more opening in months to come, there’s a discussion we need to have: how to name breweries and beers. This post is going to be related to the former rather than the latter (I’ll write that next). Both I think, are very important, because of one simple truth:

This is a simple fact that I’ve observed from almost six years of selling beer to the public. There are also quite a few pitfalls that new breweries can fall into when it comes to naming themselves and their beers.

Now I know what you’re thinking and I totally agree: surely the quality of what’s in the glass should be more important than what it says on the label. Yes, it should. But getting your beer into the hands of first-time customers is also important. You want your brewery name to stick in someone’s head and, if your beer impresses them, you can create something valuable – a returning customer.

It’s true lot of brewery names come from stories. Stories are good. Stories help build a brand. ParrotDog was founded by guys who owned a parrot and called each other ‘Dog’. That’s great. But stories are not what I want to talk about here. I’m more interested in the mechanics of what makes one brewery name work better than another.

I had originally intended for this post to list some hard and fast rules of how to name breweries The more I thought about it, the more I realised how much of this is subjective. But in my six years I’ve poured more beers than most people will drink in a lifetime. There are certain things about brewery names that I see trip-up customers time and time again. Here are a few, what I guess you’d call ‘guidelines’ to avoiding some of the major pitfalls of naming a brewery.

No offence to any brewers I use as examples. Firstly this is no reflection on the quality of your beer. Secondly, quality of beer is ultimately more important. A bad brewery name is no reason to turn your nose up at a good beer. Third, if you’ve had your name for years and you’re doing just fine, then by all means ignore this post. This is more directed at the newcomers. Alright, let’s do this. And we’ll start with perhaps the most important point first.

Short is good. Short is dynamic. Short is easier to remember. Brewery names need to be direct and to the point. It should be one or two words, three at most (but only if one of them is ‘and’ or ‘the’). This doesn’t include the words ‘Brewery’, ‘Brewing Company’ or similar, which naturally get sliced off the end in conversation. Nobody ever refers to Brew Moon by its full name: ‘Brew Moon Brewing Company’.

What I consider to be good brewery names are a handful of syllables that roll off the tongue and are away: ‘Liberty’, ‘8 Wired’, ‘Three Boys’. These are simple words that you can say without tripping-up over. There’s a very good reason for this – when written on beer labels, tap badges or menu boards or spoken to bartenders, brewery names sit in front of a beer name. Let’s take an example: 8 Wired Hopwired IPA – Good. Quick, easy, to the point (some people don’t like the repetition of ‘wired’ in the name, but that’s a different discussion).

Everything as it should be.

Sometimes however, customers get confused about this name and refer to 8 Wired as ‘Number 8 Wired’ or occasionally ‘The Number 8 Wired’. Fair enough, it’s an easy mistake to make as the name originates from number 8 wire. But for argument’s sake, let’s give that a go. The Number 8 Wired Hopwired IPA – Bad. A clunky mouthful. 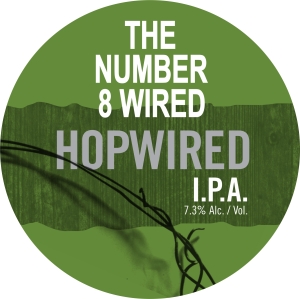 This is why we can’t have nice things.

Beer names can already lumbering enough, if you’re going to hitch it to an already difficult brewery name, you’re not doing yourself or your customers any favours. But how long is too long? Hard to say. Two breweries that I think are pushing acceptable limits of syllables are ‘Garage Project’ and ‘Beer Baroness’. I think both get away with it, Garage Project because it has a nice structure, and Beer Baroness because it has alliteration, but that’s just me.

2. Names of People/Places are Perfectly Acceptable

There are quite a few breweries named after the brewer. Sometimes it’s a first name, like Mike’s or Dale’s. More frequently, It’s a surname:  Townshend, Gailbraith’s, Croucher, Harrington’s, Emerson’s, Fitzpatrick’s, Cassels and so on. Very rarely, it’s both first and surname – I’m looking at you, Ben Middlemiss.

Perfectly fine. Except maybe the ‘Crisp’…

Likewise, place names are commonly used: Invercargill, Baylands, Coromandel, Hot Water, Kaimai, Queenstown, Arrow, Waiheke, etc. This is also a good option, although I guess it might reduce your options of changing where your brewery is (Baylands is not on Baylands Road anymore). Personal or place names are perhaps the least interesting way to name a brewery, but they are basically functional. I think names like these are a good option because they usually obey rule 1. – They’re short and informative. Although, as I type this I realise I shall never found a ‘Jauslin’s Brewing Co.’ as no Anglophone can ever say it properly…

Animal names are another popular choice, and seem to work fairly well. They also tend to be short and to the point. Some go simple – just the animal name. Tuatara, Moa and Kereru fit this bill. Others, like to use what I call the ‘Indie Band’ approach. A trend in recent years amongst indie bands is to use a ‘something-animal’ name. Hence: Modest Mouse, Fleet Foxes, Frightened Rabbit, Wolf Parade, Tame Impala, Arctic Monkeys, Band of Horses, Grizzly Bear, Deerhunter, and so on (it’s a regular Animal Collective).  Similarly, in the brewing world, we have Golden Eagle, Golden Bear, Monkey Wizard, Velvet Worm, Pink Elephant, Crafty Trout, and I could go on. Animal names are a good option, with one notable exception: Dogs. You see the problem is, people come in and say “I want that ‘Dog Beer’ please,” and I really can’t help them because in New Zealand, we have:

That may not seem like many but they may, even in the New Zealand context reasonably also be referring to:

I’m officially marking New Zealand as above quota on ‘dog’ breweries. No more guys, we’ve got too many already. In fact a search for ‘Dog’ on Untappd brings up 760 brewery results. Forget New Zealand, the whole world has too many dog breweries.

So you’ve come up with a clever pun or something, and you think you’re going use it to name your brewery. That’s cool, but keep in mind one thing: you will be repeating that joke again, and again, and again. It gets less funny every time (this is known as The Bee Sharps Effect). Now this isn’t an issue if the name works well regardless of the joke. I’m thinking of Yeastie Boys here. “Yeastie Boys! Haha, it’s a music-themed brewery riffing on The Beastie Boys!” But underneath that joke, I find ‘Yeastie Boys’ to be a nice, short, chewy-sounding name.

But what if the name isn’t so good? Well then the joke just sits there being repeated, again and again. And it’ll be repeated a lot. It’ll be tacked on the front of every beer you brew. It’ll be plastered on menu boards and tap badges. You will never escape it. Fork & Brewer, I’m looking at you guys. The Cameron Slater school of humour. Yeah. Nah. Sorry Sean, Colin, Neil and Kelly. I really like your beer, but I think you should have stuck with Bond Street Brewery.

A lot of brewery names have descriptive words in them – Pink Elephant, Wild & Woolly, Fat Monk and so on. These are all fine. But choose your words carefully, because if you include a descriptor in your brewery name that frequently applies to beer, many customers will automatically assume that descriptor applies to any beer you make. What do I mean by that? Well, let’s look at the two most common examples. First of all, ‘hop’. As in: Twisted Hop, Dr. Hops, Hopmonger, Hophugger, Hop Federation, Hop Baron, Hops Valley, etc. Besides being incredibly unoriginal at this stage, having ‘hop’ in your name can put off many inexperienced customers who see the word on a menu and automatically steer clear of it, because for whatever reason, they’ve decided they don’t like hoppy beer. 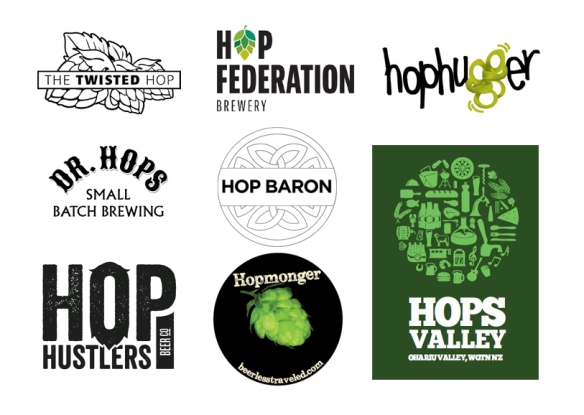 It might also be a time to call a moratorium on ‘hop’ names as well…  Although three of these breweries are no longer operating.

Likewise, but perhaps for another reason, be wary of the word ‘golden’. As in Golden Eagle, Golden Bear and Golden Ticket. Inexperienced drinkers see the ‘golden’ on a menu and automatically assume the beer in question is a lager of some sort (the same but opposite may apply to the ‘black’ in Black Dog).

Think I’m kidding? I’ve had customers come up to the bar and ask me: “So this Golden Bear Seismic IPA, that’s like a Pilsner, right?” or “Golden Eagle Coalface Stout, that’s a lager, yeah?” Or they just order a Coalface (which is an awesome beer by the way) and look at me blankly when I put a pint of black beer in front of them.

Now I know ‘Coal’ signifies dark and ‘Stout’ should clinch the deal, but what needs to be understood here is that a large slice of customers, perhaps even a majority of the people who drink all the ‘craft’ beer in New Zealand, are not Beer Geeks. They may not know the difference between a Lager and a Stout. They may assume all Lagers are pale, and all ales are hoppy. They may have all manner of assumptions they have picked up or been taught over the years.

I’m not saying we need to pander to or talk down to this demographic (that’s patronising behaviour that breeds resentment). I’m just urging a bit of forethought as to as to how your brewery name will influence customer expectations.

If you’re opening a brewery and you, even for one moment, consider giving it a ‘dog’ name, I will come around to your brewery, open all the valves on your tanks, and then beat you to death with your mash paddle. I don’t want to go to prison.

10 thoughts on “How to Name a Brewery”