Yeah, I know what you’re thinking: “This’ll be a short post”. But stick around, because you may, against your better judgement, find yourself in Tauranga and knowing where the beer is at can often turn a bad visit to a city into a good one.

Certainly I had low expectations when I went for my annual pilgrimage to my ancestral homelands (that is to say, my folk’s house) for Christmas. Tauranga has always had the meanest skerrick of a beer scene, in the form of one brewpub, Brewers Bar in Mount Maunganui, and one of those ubiquitous Belgian Cafés that charge you $14 for a Leffe Blonde. But this year, I had something new to look forward to: Croucher has recently opened a its second brewbar on The Strand, the ‘heart’ of Tauranga’s ‘nightlife’.

So it was that on Christmas Eve-Eve, I rocked up to Brew Tauranga, and was immediately and immensely pleased to discover they had taken over the old Coyote bar.

There used to be several Coyote bars around New Zealand, all of which (I’m reliably informed) were amongst the worst, most feral nightclubs in the country. I’ve only been ‘out on the town’ once in Tauranga, and did indeed visit Coyote’s and found it utterly awful. So with an enormous degree of satisfaction, I approached the bar, where I had previously drunk Jägerbombs and ordered a craft beer.

Now I have a reservation about brewpubs: for the most part, you can pretty much only drink the beers of one brewery, and if that brewery doesn’t make a balanced range of beers, then barring guest taps, you’re a little screwed for tap selection. At Brew however this was not a problem. First of all, Croucher makes a pretty excellent and balanced range of interesting beers. Secondly, of the twelve taps they had, six were Croucher, six were guest. Doing it right. I also took a peak in the fridge and saw a good selection of local and international bottles. I even heard a rumour they’re getting an off licence. 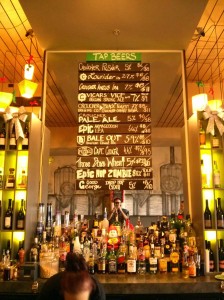 I am plagued however, with a need to criticise and in this regard, I do have to say that Brew’s environment is rather, shall we say, uninspiring. Not awfully much has been done to the interior, besides a new coat of paint and new partitions. The bones of Coyote show through rather starkly in places.

Some things, have in fact not changed at all…
This is the old Coyote logo stamped on the chairs. I actually found this kind of cute.

They’ve also done the standard Mac’s bar thing of having a brewery mural on the wall, but it’s a bit sort of, well, grey and depressing really. 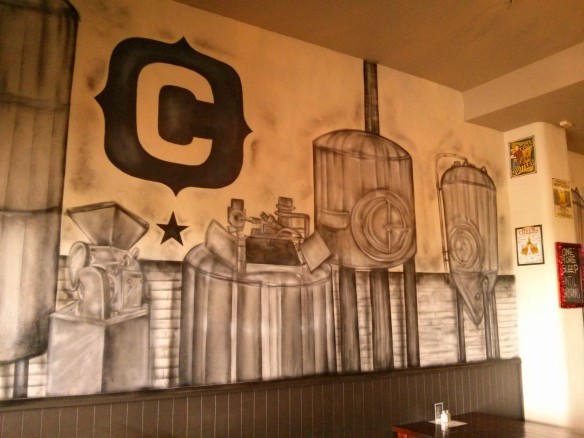 I find this less ‘Funky Cubist Brewery’ and more ‘Eastern-Bloc Soviet Factory’. Makes me wonder how many Ukrainian peasants died for my beer?

A few beery themed pictures and some hop-vines provide a respectable beer bar veneer that doesn’t entirely cover it’s club heritage (speaking of which, I wouldn’t like to be there late of a Saturday night. Or anywhere on the Strand for that matter).

But having said that, I can wholeheartedly recommend Brew. It’s a matter of context: Sitting in what used to be one of the worst clubs I’ve ever been to, the smell of Tauranaga harbour (a mixture of salt and rotting sea cabbage) drifting past; good company in the form of an old school friend and most importantly a good beer in hand, I can’t help but feel sanguine. I’ll take it as a sign of the times, and of the future too. Good beer is heading for the mainstream. It’s not there yet, but Brew is as important to the progress of in industry as any of the beer bars of Wellington. And in that regard, I love it.

And that was I thought, the only beer spot worth visiting in Tauranga. That was until we went for our obligatory Boxing Day walk around The Mount, to make us feel less like fat sacks of crap for eating a kg of ham the day before. Cruising down Maunganui Road, we passed a place called Mount Brewing Company. I had to stop and go in. It was compulsory.

You’ll remember at the start of this screed, I mentioned The Mount had an obscure brew pub. It’s never really been on my radar though, for two reasons. First of all, it’s in a semi-industrial area inconveniently far away from anything of interest. Second of all, I went there once, about four years ago and it was, well, a bit shit. Half the beers weren’t pouring and the Pislner I had tasted mysteriously of cornchips.1

My suspicion was that Brewers Bar had shifted, had a facelift or opened a second venue. This was confirmed almost immediately, when I recognised a number of beers on tap. That could have been grounds for buggering off right then and there, but my sixth sense (AKA my good bar-sense) was tingling, so I decided to give it a go and had a beer.

I ordered an APA. It was pale orange, super peachy (vaguely reminiscent of Sculpin IPA) and came in a mason jar with a handle. Win. 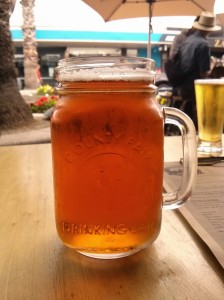 It was also had a slight touch of creaminess to it, which could have been diacetyl, or could have come from crystal/caramel malts. But that was by no means a deal breaker. It was a lovely beer. I also tried a little of the ‘Certified Shaggy’ Ale, which I took to be some sort of ESB-ish thing, but later turned out to be a Dunkle. Wait, wouldn’t that make it a lager? Who’s counting anyway?2

So the beer was good. The ambience was nice too. Like Brew it felt like it was taking cues from Mac’s bars, this time erring towards the more colourful and with a beachy-twist. The tap lineup was fairly mainstream but pleasantly varied and Good George even made an unexpected appearance on the guest taps.

I had a brief chat to the staff. They were friendly, and confirmed that the place is pretty new, and tied to the older Brewers Bar that I had been to previously. I also quizzed them a little on the beers and they seemed to know what they were talking about. In fact, the only thing they couldn’t tell me was why some of the bar’s logos said “Since 2006”, whilst others said “Since 1996”.

THIS IS NOT ADEQUATELY EXPLAINED!

Decade-long discrepancies in their history aside, I like Mount Brewing Co. a lot. Unfortunately I only had time that day for one beer, but I would very much like to go back. That was in fact the last of the beery adventures I had in Tauranga. I would have liked to have dropped in on Fitzpatrick’s Brewing, but time, effort, and a cold curtailed any further exploration. If I could summaries the Tauranga beer, I’d say it falls somewhere between ‘undiscovered gem’ and ‘diamond in the rough’ (undiscovered gem in the rough?).

Either way, it’s hugely promising for the future of the New Zealand beer scene outside of the established beer-centres.

1. Interestingly, no brewer has ever been able to explain what causes this. Is it a malt thing? An infection? A yeast byproduct? Dirty lines? I’d love to know. ↑