I stopped reviewing beers on this bLOLg a long time ago. The main reason was I was boring myself and if I’m bored it must be ten times as worse for my readers. I am however, returning to the old school beer review for a moment, and for a good reason: statistics.

You see WordPress provides you with some interesting statistical data on your site traffic: what pages have been visited, where viewers have been linked from, what countries the IP address comes from and interestingly, what search engine terms are used to find your site.

It’s fascinating to see how people stumble across a blog. Mostly it’s people actually trying to find my site, searching ‘the bottleneck blog’ or similar. But sometimes it can be a bit more unusual. Case in point, this gem popped up after my discussion of the San Francisco beer scene: 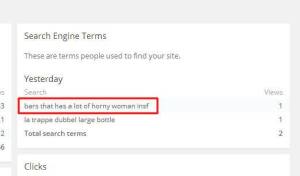 Strangely though, the most common search term, accounting almost a quarter of all known searches, is a variation on one word: Hophugger.

Now I’m not sure if this is searches from consumers, wanting to know more about the beer or from the producers, Treehugger Organics (don’t bother clicking on that link, the site is still under construction, a year after I first visited it) wanting to know how their beer has been received. What I do know is that this has made my review of Hophugger Pilsner my most searched for post since I started writing. So if only for the sake of site traffic, I thought I might as well review the new Hophugger beer, Coasters Pale Ale, almost exactly a year after I gave the Pilsner a good dressing down.

Warning:
If you just came here to get my opinion on the actual beer, skip to the last paragraph, because I’m about to go wildly off topic. Likewise, if you’re one of those people who can’t stand to hear criticisms of anything small breweries do (I call these guys the Anti-Beer-Snob Mafia), you should probably do the same. And as always, caveat lector.

Now last time, I gave Hophugger Pilsner a lot of stick for having a terrible name, an ugly label and being way off style (although I did also say the beer was quite nice). Two out of three of those things subsequently changed. The beer became a lot lighter and more Pilsnery, which I liked, and the label got an update. The name however did not change.

Yeah, I know they’re stuck with Hophugger, unless they do a complete brand overhaul. So there is no point it banging on about it, but just try something for me. Say “Hophugger” repeatedly, really fast , and at the same time, try not to think about how much it sounds like “Oh Bugger!” See what I mean? Still I guess they’re stuck with it, so lets not flog the dead horse any longer.

What I really took exception to though, was the label. And I was rather pleased to see that subsequent batches went from having the hideous green-on-green-on-more-green label to this much less hideous black affair: 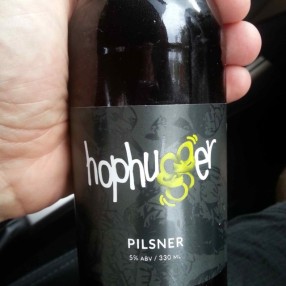 It’s not brilliant, but it gets the job done. So lets see the new Pale Ale bottle then: 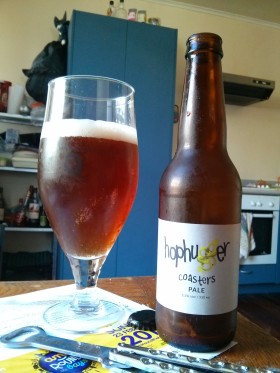 Yeah, nah. Not loving it. The green on black at least popped a little and showed off the hop textures on the label. The white label looks completely flat and uninteresting. This beer looks as exciting as a can of Budget Brand Chopped Tomatoes. Yeah, I know it feels like I’m being unkind, but I gave Gisborne Gold a public flogging for less. Oh Gizzy, all is forgiven. You may look like you just attended a font-festival, but at least you look enticing on the shelf.

And that’s what this is all about: enticing people to drink your beer. The average punter (whose job doesn’t involve keeping up to date with every little thing that goes on the the New Zealand beer scene), will probably never have heard of Hophugger and will have nothing but the labels to go on. If the label doesn’t say “pick me, I look delicious!” then they’re most likely going to spend their money on something else. I’d love it if this wasn’t the case, but that’s not the way humans work.

Certainly I can say from anecdotal experience, this is true. When confronted with the labyrinthine fridges at Hashigo Zake, frequently the overwhelmed customer will jump on the nearest label that catches their eye. Now imagine you’re at Thorndon New World with 300+ lines of beer and no bartender to say “this one’s nice; label’s not much but the beer is really good.” See where I’m coming from?

Ok, sorry Hophugger. I’ll be honest: I’m using you to take a shot at the wider industry. I do feel bad that I’m railing against somebody’s labour of love here. But there is a serious point to make here and I’m going to use Hophugger to make it. A while back I took a subtle dig at the craft brewing sector for having terrible distribution, to the point of being unprofessional, and I suspect you could categorise this rant as a much similar bugbear.

Small breweries are competing for shelf space and customer attention against the likes of Crafty Beggars and Foundry Road, both of whom have dedicated brand managers. If small breweries are to flourish, they need to be able to compete with the big players, at least partly on their terms in the field of marketing and (I shudder to use this term) brand image, because that’s the first hurdle to reaching the customer. And once they’re past that first hurdle, they’re away laughing, because the quality of the product from small breweries is (99% of the time) far superior.

Whilst I’d like to believe that a superior product alone will speak for itself, that’s only true if it manages to get to the podium at all. Working ostensibly in retail, I can definitely vouch for the fact that appealing and dynamic brand image and product packaging (oh god! More marketing-speak!) is much more important that anyone in the industry is perhaps comfortable admitting.

In the craft/micro/whatever brewing industry, there are breweries that have an understanding of brand image and marketing: Garage Project, Yeastie Boys, Panhead, Epic, ParrotDog, Hallertau, Liberty and urg, Moa (although don’t follow their example) and those that miss the point entirely (I won’t name-names). And yes, it is frequently the smaller breweries and contractors that don’t want to pay a big, flash design company that struggle with this the most. But it’s not surprising that the breweries I listed above are what you might call the more (broadly speaking) ‘successful’ breweries.

And you know what, to your credit Hophugger, there are breweries that miss the mark by a much wider margin than you do.

Anywho, like a steampunk-paperweight, all I’m doing right now is making so much pointless hot air. A beer should stand or fall by what’s in the glass. So how does Hophugger Coasters Pale Ale taste?

I said in my end of year roundup that breweries who make a ~5% pale hoppy thing with a solid malt body win at beer, and gave a list of examples I liked. Congratulations, add yourself to that list, because I really like this Pale Ale.

The malt character is caramelly, with a touch of biscuit. The hops are classic New Zealand hop green-fruit-salad, with just a hint of that aviation fuel burn that I like in small quantities. It’s a really, really good pale ale and I encourage anyone out there who sees it to give it a go.

So to finish, let me quickly summarise this post:

If you take anything away from this review, let it be that.